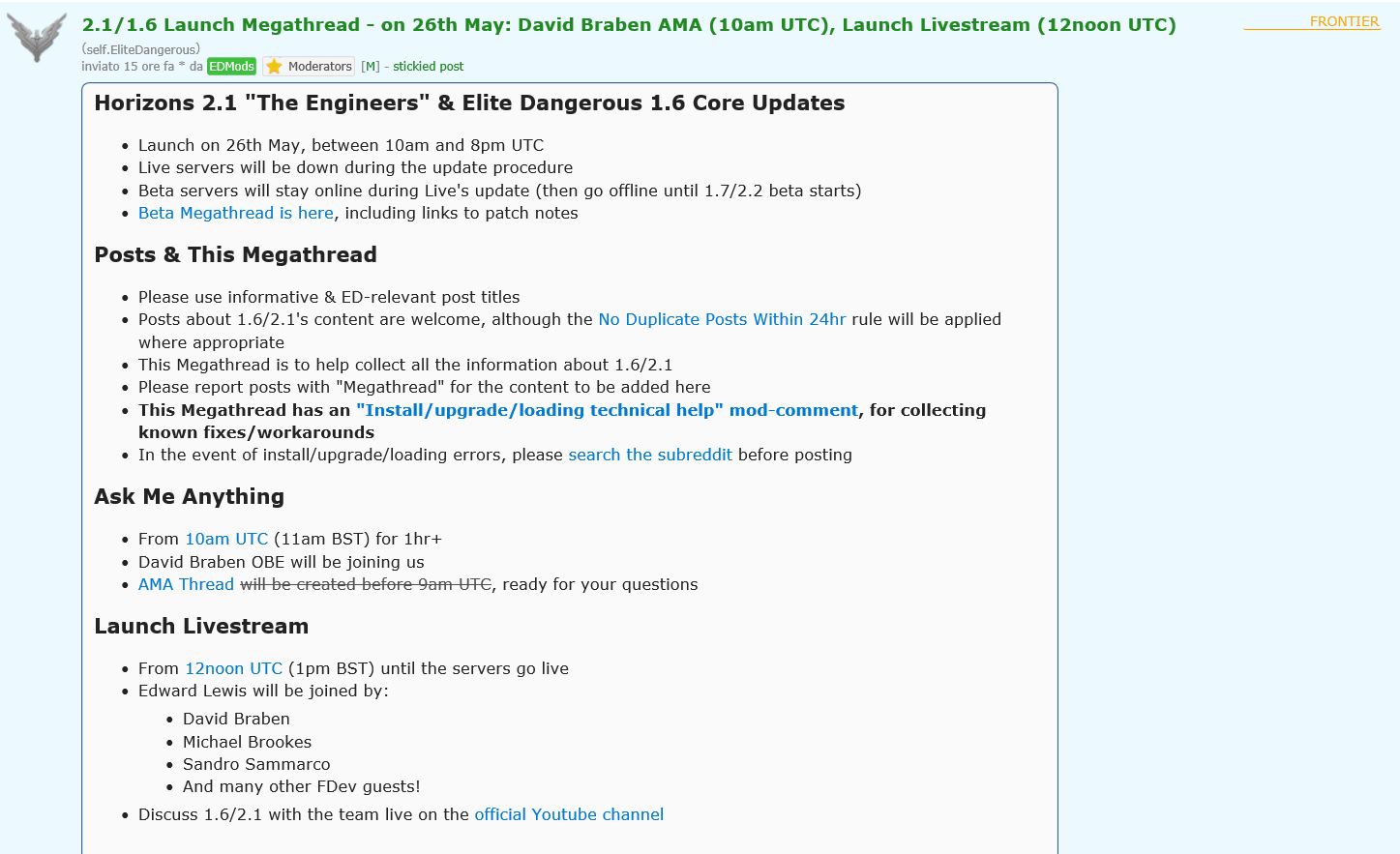 JimKeirCMDR JimKeir  Is there a reason you’ve still got no support for 3D monitors? I understand that the focus now is VR but it’s disappointing not be able to use stuff I already have. You’ve got side-by-side and anaglyph 3D but no support for NVidia 3DVision or AMD HD3D.
DavidBrabenCEO & Founder  We do support 3D as you say. Other than through VR the usage of 3D is generally been quite low. When there is a lot of demand for a particular technology we have looked at it and generally supported it (Oculus, SteamVR, Track IR, 3D as currently supported, HOTAS etc etc)

StuartGTCMDR GTuk[M] Hi David & thanks for joining us!
Please can we get some weekly or monthly general playerbase stats, as it’d help the community show there are more playing CMDRs than just the Steam figures (courtesy of SteamSpy/SteamCharts) imply?
Simply “X number of CMDRs played Elite Dangerous this past month/week” would suffice.
While Steam makes up over 50% of the game’s ownership, we don’t think it’s a representative sample of the playerbase, and official figures would be more useful.
DavidBrabenCEO & Founder  We have put out figures via the city, but generally have not released more detailed stats.

Infidel_DeityCMDR PowerPlay decals! PowerPlay paint jobs!
In the shop: Huge packs of decals. Paint jobs for ALL the ships.
And: Give the “Cobra” Mk IV some love! 🙂
With Love! Iinfidel Deity 🙂
DavidBrabenCEO & Founder Powerplay decals is a great idea. Something we will look at.

shallowkalCMDR Large ships miss out on lots of missions and opportunities at outposts. Is there a way that all large ships can deploy fighters so that we can land at outposts to select and and hand in missions.i understand why large ships shouldn’t benefit from the station services /trade missions etc but this would be an excellent alternative so that we can still enjoy combat missions/bounty vouchers etc.
DavidBrabenCEO & Founder  Not for ship launched fighters (which cannot carry cargo), but it is something we would like to look at (eg shuttles) in the future.

PeteClements  Is there a small team doing any preliminary work on atmosphere landings / walking (in stations etc) currently being looked at? As it is almost there for walking in station…
DavidBrabenCEO & Founder  Yes. We have ongoing work on planets, including atmospheres, planetary life, walking about and lots of other very exciting things for the future.

Barking_Madness  Hi David,
Do you miss programming?
DavidBrabenCEO & Founder  Yes. There’s something great about head down working on a problem.
Having said that, I really enjoy what I’m doing now too.

Mhoram_antiray Hey Mr. Braben. Thanks for the AMA.
I’ll get right to the quesiton without all the storytime:
Now with 2.1 having been delayed, does it affect the seasonal schedule? Will we get 2.2 in a few weeks or will the whole schedule be pushed back?
That’s all 🙂 Have a nice patchday.
DavidBrabenCEO & Founder  As you hopefully see from The Engineers, having a bit more time has really helped with the quality and richness of the update.
We don’t yet have a time for 2.2 but it will not be ‘a few weeks’. We will put it out when it’s ready, and that is what is important.

jarsquiCMDR Kuumies I would like that add that dog fighting in small ships above (300-800 m maximum) a planetary base is INCREDIBLY fun. Would it be possible to add CQC maps with gravity?
DavidBrabenCEO & Founder It is fun and pretty risky, fighting near the surface. Nice idea!

ConsonantlyDrunkCMDR  On episode 100 of Lave Radio (or some related E:D podcast) you seemed to express disdain for violence when approaching a First Contact situation with an alien race, yet the only tool you have given us in our approach to the Thargoids is either ignore the mystery or lasery death. What is your response to this meta?
– ChristianMCMDR  I don’t think we know for certain that the Barnacles are actually Thargoids. They may just be a resource for them.
– – ConsonantlyDrunkCMDR  so far as I’ve understood from activity on this subreddit/activity on the FD forum/Lave Radio, Barnacles=Alien Life Form=Thargoids. Like, documented by Mike Brooks and shit.
– – – DavidBrabenCEO & Founder  Barnacles are genetically engineered based on an earlier life form… 😉

jarsquiCMDR Kuumies Any plans when and if we’ll be able to “pledge” ourselves to a faction? Even in a superficial way that would add our chosen faction as part of our target information. I would love to have my player faction name shown on my target panel!
DavidBrabenCEO & Founder  We’ve added a little to the ‘faction love’ in The Engineers already – with the mission grouping by faction etc. Pledging is something we will think about, but it is not imminent…

Golgot100CMDR Greetings DBOBE!
Later in Horizons we’ll be getting multi-crew. Could you give us a hint as to how we’ll spend our time in Supercruise / between engagements? This seems as challenging to make compelling as the more involved activities like combat.
DavidBrabenCEO & Founder  With multicrew, different players will be able to do different roles – should work well. We do want to do a lot more with missions; more details to come over time. We’re not short of ideas! 🙂

CMDR_LYSAN Hi David, are there an ETA for planetary mining? and will we get a special SRV for that purpose 🙂
2.1 is a great add-on, thank you to the whole team.
Cheers
DavidBrabenCEO & Founder  No ETA yet, but it is planned.

CMDR_BraveStarr  What is the most impressive thing you have seen the community create?
DavidBrabenCEO & Founder There is so much. I love Isinona’s ‘flight assist off’ videos The Obsidian Orbital CG was pretty impressive with 10,000 participants There are so many great things – enough to put several in the newsletter each week for more than a year! Frankly the best thing is probably that we have such a great community.

SpudTheNickCMDR  How many tons of fish were used in the Engineer beta?
DavidBrabenCEO & Founder  1,188,078 units of fish were bought in the beta.
That’s a lot of fish. Something the late great Douglas Adams would have had something to say about!

ZachelCMDR What is your stance on the senseless destruction of organic structures?
DavidBrabenCEO & Founder It is something humanity has been doing since the dawn of time. I don’t see it stopping now…

Ryan_T_SCMDR  What do you think about Robigo and (long range) smuggling missions in general?
– DavidBrabenCEO & Founder  Long range missions are great, as long as they are not too destabilising.
One thing I think can be a problem is where people just do a particular ‘milk run’ and little else; it can be quite repetitive, and is something I would rather not encourage. Robigo is great, but it will vary over time.
– – Kishandreth  A follow up. Would it be possible if jaques station makes it out to beagle point to force a mission with a 2 week timer to spawn? (bringing data back to the bubble)
– – – DavidBrabenCEO & Founder There are rumours just coming in that Jacques hasn’t arrived…

Nicou12313 By “Winter is coming”, do you mean that Felicia will take over the bubble and reveal herself as a Thargoid? It explains why she caged Jasmina! Oh wow, they are among us! drool
DavidBrabenCEO & Founder (spoiler) . . She is not a Thargoid… 😉

JimKeirCMDR Do you still have plans to expand the companion API to have more features, and work for XBox accounts? As the author of the EVA Flight Computer (iPad/iPhone) I’d love to be able to add more information and interaction but I’m limited by the API.
DavidBrabenCEO & Founder  This is something we are looking at now.